Cameroon – IDB: Signing of a 9 billion FCFA accord 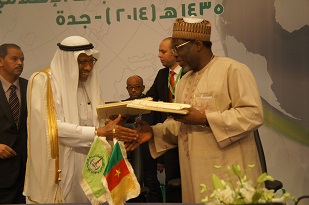 Cameroon took part in the working sessions of the 39th annual meeting of the Council of Governors of the Islamic Development Bank that held from the 24th -26th June 2014 in Jeddah. This meeting coincided with the celebrations of the 40th anniversary of this financial institution for development.

The Cameroonian delegation was led by H.E IYA TIDJANI, Cameroon’s Ambassador to the Kingdom of Saudi Arabia, and Vice-Governor of IDB for Cameroon.

The president of IBD specially invited two important guests to this meeting. There were Mr. YOUSSOUFA DAOUDA , former Governor and former Minister of  Plan who signed the finance agreement for the construction of the Song Loulou dame in Cameroon (first transaction approved by the bank on its creation), and H.E MOHAMADOU LABARANG, Cameroon’s Ambassador to Cairo (a former vice Governor and former Executive Director of IBD).

Alongside this annual meeting, Cameroon and IBD signed a 9 billion loan agreement to finance the support project for scholars in fields of priority education.

The Cameroonian delegation equally took part in many other activities especially the working session with experts of IBD focus on the examination and evaluation of the state of cooperation between the two parties.

This meeting provided the opportunity to take stock of the state cooperation with IDB. Presently 24 projects are sponsored by IDB in Cameroon estimated at the sum of 295.08 million dollars (i.e. about 174.540 billion FCFA)

During the meeting, Ambassador IYA TIDJANI advocated for the endorsement of the dossier for the appointment of a Field Representative of IBD in Cameroon and for the effective commitment of the Bank for the financing of the Olambo -Bigambo road.

The following projects were equally discussed upon:

–      The amelioration of the quality of primary education in Cameroon

–      The project for the prevention of the transmission of HIV/AIDS from mother to child in the East Region.

–      The project for cotton development and food crops cultivation.

–      The support project for education in priority areas

–      The project for the fight against malaria

–      The program for improvement of agricultural productivity for small holders in sub-Saharan Africa.

–      The project for the empowerment of primary and secondary health-care services in Cameroon.

Within the framework of the 40th anniversary of IBD, there was an exposition organized to present the products, the achievements and the fields of intervention of the Bank.

In the education sector, Cameroon won the first African prize among member countries of IBD on its project for the amelioration of the quality of primary education in Cameroon.