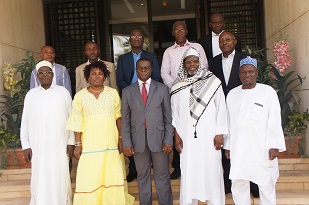 The annual revision of the electoral registers ended on 31st august 2014 throughout the national territory and abroad.

Before the end of the registrations, a delegation of Electoral Board of Elections Cameroon constituted of Dr Fonkam Azu’u, the President of the Board, Mr Mohamadou Boubakar, member, and Jean Paul Ntsengue, head of President’s office, paid a visit to the polling stations of Saudi Arabia from 8 to 12 august.

The delegation came to control and supervises the biometric recompilation of electoral registers launched on February 2014 in Jeddah and Riyadh.