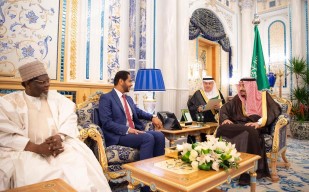 H.E Iya Tidjani was received among other diplomats by HRH King Salman at Al Salam Palace in Jeddah.

The King received those Diplomats on the margins of the 3rd Extraordinary Session of the Islamic
Educational Scientific and Cultural Organization (ISESCO) held in Makkah from 9-10 may 2019.

Also during this General Conference, Dr Salim Bin Mohammed Al Malik has been appointed as the new
Director General of the Organization.