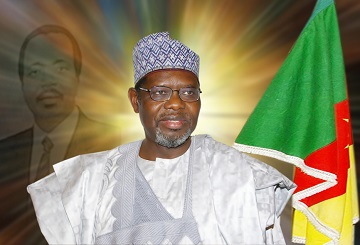 H.E.M IYA TIDJANI was appointed in February 2008 as Head of the Cameroon Diplomatic Mission in Riyadh.
He is an experienced diplomat who has held great positions. He was Attaché at the Presidency of the Republic in 1979 and Chargé de Mission at the same Presidency in 1982.

After the Presidential palace in Cameroon, he was appointed First Counselor at the Cameroon Embassy in Bruxelles in 1991, then Minister Counselor in 1997. In 2002, he became Ambassador Deputy Permanent Representative of Cameroon at the United Nations in New York.

He got a doctorate in International Relations in 1978 at the International Institute of Cameroon (IRIC).
In 2000, he obtained a Post graduate diploma in International Trade at Solvay School of Commerce of  Université Libre de Bruxelles, then Minister Plenipotentiary special category since August 2002.
He was an Executive Board’s member of the Cameroon Handball Federation for 10 years and an Executive Board’s member of the Cameroon Basket – ball Federation for two years. He was also the General Treasurer of the Cultural and Islamic Association of Cameroon (ACIC) from 1983 to 1991 where he played an important role.

H.E.M IYA TIDJANI is accredited to Bahrain, Kuwait, Oman, Qatar, United Arab Emirates and Saudi Arabia.
He is the Permanent Representative of Cameroon at the Organization Islamic Conference (OIC) and substitute Governor of the Islamic Development Bank.
The Ambassador IYA TIDJANI is a devotee Muslim who performed pilgrimage to Mecca in 2000 with his wife ALOHOU HERMINE AFFI MAIRAMA.

He is a father of three.