Letter of credentials of H.E Iya Tidjani to the Emir of Kuwait 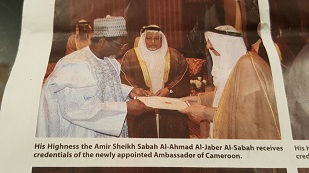 H.E.M IYA TIDJANI, Ambassador of Cameroon in Kuwait with residence in Riyadh, presented his letters of credence to His Excellency Ahmed Al-Sabah Al-Sabah, Emir of Kuwait, on Tuesday, 14 March.

The Kuwaiti Emir was assisted for the occasion by the Minister of Affairs of the Emir’s Office, also known as Amiri Diwan, the Deputy Prime Minister, Foreign Minister, Amiri Diwan’s Assistant Secretary, Cabinet, the Protocol Director of the Ministry of Foreign Affairs and the Commander of the Prince’s Guard. 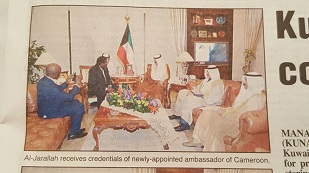 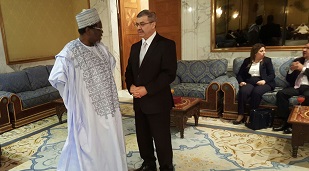 The presentation of credentials opens new perspectives for cooperation between Cameroon and Kuwait.
H.E.M IYA TIDJANI was appointed to the State of Kuwait by Presidential Decree No 2016/197 of 18 April 2016.